Back to all posts

This is a work in progress but I’m having fun doing it! It answers the often asked question, “What are my influences” but for me that’s a very deep question with a very long answer.

My “instru-vocal” approach to improvisation stems from a long history of playing musical instruments since I was a child. The “music bug” first bit me when I heard Mozart’s “Eine Kleine Nachtmusik,” which I found among my parent’s small but tasteful collection of “high fidelity” vinyl disc recordings. Having discovered gold, I began to spend most of my time digesting the jazz and classical music I uncovered from the shelves, with an occasional departure to Broadway musicals and a very funny album by the Jewish comedian/singer who was popular at that time, Mickey Katz. I can still remember running around the house singing Frederick Loewe’s “I Could Have Danced All Night,” shadow boxing to Tchaikovsky’s “Cappriccio Italien” and imitating Katz’s Yiddishkeit rendition of Tennessee Ernie Ford’s 1955 hit single,“16 Tons” (of latkes). 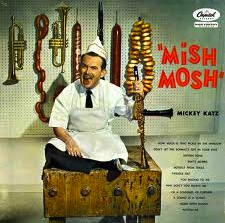 When I wasn’t hanging out in the library I was glued to our black-n-white television set watching Terrytoons featuring Farmer Alfalfa (aka Farmer Gray) with a supporting cast of cell animated cats, dogs, mice and a collection of very clever and mischievous farm animals. These “silent” cartoons were far from silent! Instead of audible dialogue, Terry underscored the action with a steady stream of the most fantastic repertoire of classical music imaginable! To this day, when I hear certain memorable works by classical composers on the radio, I get “bumps of the goose” (as they say in Europe) and also an instant flash of little mice ice-skating across Farmer Gray’s baldhead while he slept!

Growing up on Lon-Giland was a pretty good time as my town junior high school had a decent band and orchestra that rehearsed and performed regularly. In 8th grade, my interest in jazz music happened to coincide with a few other jazz aficionados who were wandering around campus looking to play some music so we formed a small, invisible jazz elite coalition consisting of two trumpets, bass, drums and piano. We got our beloved Biology teacher, Mr. Campbell,* to facilitate. He was the only African American teacher at the school; a man who understood the importance of personal vision/effort, who liked young people and loved jazz music. We rehearsed on occasion, studied privately with the local music teachers who were excellent and became well-respected musicians among our peers-a big deal in junior high school! But around 1965 we were drowned out by Beatle-mania and forced to take refuge underground to covet the forbidden fruits of Coltrane, Miles and Dizzy, while the earth rocked above us. Succumbing to peer pressure, I decided to reclaim my status by making myself visible as “the cool jazz drummer who could play rock.” To further my charming bravado I made it known that my rendition of the drum solo from the Surfaris’ hit beach surf-song, “Wipe Out,” was brilliantly executed with paradiddles instead of the single stroke pounding my plebian peers could barely manage.

During that time, the only popular group playing quasi-jazz music was Herb Alpert & the Tijuana Brass. Herb even played a few truncated trumpet solos on their hit song, “A Taste of Honey,” plus the song modulated and had a tag/Ellington-ish ending. I think it was the album covers, though, that convinced me to stay with the trumpet a bit longer. 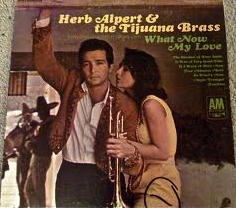 * Mr. Campbell was quite a character and I adored him! He announced exams using a feigned sinister tone that made us shiver to the bone! “We’re havin’ a little partay next Monday morning…” he would growl…..you’re only excuse for not taking this exam is…death…” And we always wet our pants as that last word left his lips…one more thing about Mr. Alphonse Campbell-he was a man of his word. His made two predictions that both became true. During one particularly disruptive class he silenced and scolded us, reiterating his favorite personal adage while pointing to a sign which read: “Success in Life Requires Labor: Think!” Mr. Campbell’s legendary proverb was plastered on the wall of his room in huge crepe paper letters above the chalk-board.  Then he pointed at me and said, “take this young man, Bob Stoloff [please].  He’s going to be great some day because he works hard!” (this happened right after the school talent show in which I hurled a flamboyant drum solo at my peers). Well, I did work my butt off. Mr. Campbell’s other memorable promise was made every time he discovered a gum-chewing victim in class. (There was no gum or beards allowed in those days and I got busted for both!) Violators were sent to the unholy gum-wattle cauldron located in the front of the room where Mr. Cambell usually perched on his pedestal.  “We’re gonna have a little science experiment at the end of the semester… (his tone getting sinister)… I’m going to boil all the gum I collect from you and those who made donations will chew dividends on the last day of class. Again pee would hit the floor as Mr. Campbell eyed us one by one like a thirsty vampire glaring at a collection of little blood-filled captives. Bets were made all year on the sincerity of Mr. Campbell’s threat. Sure enough, during the last class, he silently dumped the amalgam of chewed gum-wads into a flask (all the time giving us his evil eye), placed it on a Bunsen Burner and I swear he cooked those viscous suckers, stirring occasionally, until they merged into one huge malleable gum-globule! It looked like a softball-sized pile of multi-colored silly putty and we shrank in horror as he hoisted it from the beaker with tongs. “And now for the dividends” he said triumphantly as he slowly waded through a lake of freshly made pee! But that’s as far as Mr. Campbell went…Needless to say, I’ll never forget my 8th grade science teacher. Neither will the custodians who worked at Carrie Palmer Weber Junior High School in 1965 who were responsible for keeping the floor of the science room clean and dry.

My worst nightmare in 8th grade: